In early November, Woodland’s office placed a cardboard box and a large plastic bin in the cafeteria. The collection bins that sit to the left of the vending machines make up Woodland’s Lost-and-Found. If a student finds a book, binder, or item of clothing that isn’t theirs and is misplaced, they are prompted to bring them to the bins. Woodland’s goal is to make finding lost items much easier and more convenient for the students.

Items of clothing like coats, hats, gloves, and jackets will be in the bins themselves. If a book, binder, or folder is missing, it is suggested to check the tops of the vending machines instead.

Throughout the first quarter, the office has received many items other students had found and turned in. In the past, many students would look to the office if they had lost a personal item.

“If we make the items more visible,” Rydzik said, “I think more people will claim them.”

Now, if you find yourself running around the school like a madman, keep the lost-and-found in mind and save your precious time. Hurry though, the items will only stay in the bin until the end of the year. Then they will be donated.

“We always try to donate at the end of the year,” Rydzik said, “glasses coats, just as much as we can.” 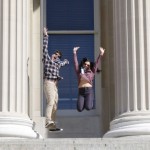